Home
/
About the journal

History of the journal 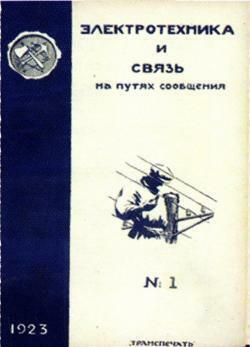 The first issue of the journal, then called «Electrical Engineering and Communication on the Railways», was published in 1923. In the second issue, addressing the readers, the head of the Communications and Electrical Engineering Department of the NKPS K.N. Chekhovsky writes: «The small, but narrowly specialized business of transport communications and electrical engineering was dimly covered by the NKPS periodicals – «Bulletin of the communications» and «Transport», where we were drowned out by economics, operation, traction, road, etc. In our special magazine we have the opportunity fix this gap. Let's try to involve in our common work, in our unification, the entire mass of our employees through the free expression of thoughts and the same free criticism and assessment ... ".

The name of the journal has changed several times: in 1926 it is «Communication and Electrotechnics», 1932 – «Signaling and Communication on Railway Transport», 1936 – «Svyazist», in 1957 – «Automation, Telemechanics and Communication», which many of our readers know well.

Looking back at the journal's 90-year journey, we recall with special gratitude the editors who headed and preserved the publication in different years. This is N.O. Roginsky, I.S. Morozov, L.A. Mamendos, S.K. Krylov. Many readers remember and know the chief editors Sofya Nikolaevna Filipenko and Leonid Petrovich Slobodyanyuk.

Leafing through the pages that have turned yellow from time to time, we read the articles of authors who published their first materials as young specialists. In the «old» journals we meet the names of K.N. Chekhovsky, A.F. Bulat, P.N. Ramlau, M.I. Vakhnina, A.A. Tantsyury, D.A. Bunin, N.F. Penkina, A.M. Pogodin, B.S. Ryazantsev and many others, who over the years became leading scientists and specialists, made a significant contribution to the development of railway automation and communication facilities and did not interrupt communication with the journal. I would also like to mention our most active authors: Yu.V. Vavanova, I.A. Zdorovtsova, G.F. Lekutu, L.I. Borisenko, A.F. Petrov, V.I. Neiman, A.A. Volkov and others who have worked closely with the editorial staff for many years.

In 1957, by order of the Minister of Railways B.P. Beschev, after a break, the publication of a monthly production and technical journal for signaling and communication operators under the title «Automation, telemechanics and communications» was resumed. In the January issue, the head of the Main Department of Signaling and Communications V.D. Buts expressed confidence that «... The creation of the journal «Automation, Telemechanics and Communication» in railway transport will make it possible to broaden the promotion of advanced experience, new equipment, and help signalmen in their struggle to implement the work plans of the Sixth Five-Year Plan ...».

And the plans were big. In those years, a program for the modernization of railways was carried out, which provided for the transition to electric and diesel traction, strengthening the track structure, updating and developing signaling devices, the introduction of train radio communications, multi-channel wire communication, automatic telephone exchanges. The leading article outlined the tasks of the signaling and communication economy in the near future, and, consequently, the magazine in covering the problems posed. «Modern technology of automation and telemechanics, - noted further in the article of the head of the central office, - allows automating the processes of organizing traffic, significantly increasing the throughput of railway lines, creating conditions for the safe movement of trains, reducing the number of workers organizing traffic ... In this regard, the most important task is wide dissemination of advanced labor methods of signaling and communication workers, exchange of experience and implementation of rationalization and inventive proposals». The main headings of the journal were: «New technology», «Initiative and experience», «Technical consultation», «Abroad» and «Review of foreign magazines». Since then, the publication continues to acquaint readers with the development of signaling and communication technology on domestic and foreign railways, reflects the processes taking place in railway transport.

At the end of the 90s, the Ministry of Railways takes a course on the introduction of information technologies in the management of the transportation process, marketing and finance, infrastructure, and personnel. The main goal of informatization of railway transport was to create an information basis for achieving maximum efficiency of the industry. In 1998 the journal received a new name – «Automation, Communication, Informatics», which more fully reflects the processes occurring in the railway transport. In the publication there are headings: «Transport informatization», «Telecommunication networks», «Information security».

The journal continues to keep in sight the issues of reforming both railway transport in general and the farms of automation and telemechanics, communications and computer technology, tells about the experience of work of labor collectives in the new economic conditions. In connection with the organization of a corporate informatization economy at Russian Railways, the magazine publishes articles on software and hardware of rapidly developing network-wide systems, such as ASOUP, DISPARK, GID-Ural, ETRAN, ISUZhT, EDO, etc.

The journal's credo is to be useful to readers. To do this, editorial staff go to the line, take an active part in the work of scientific and practical conferences, schools of excellence, which makes it possible to be closer to readers, know their lives, and provide assistance in solving emerging problems. The journal continues to actively cover the issues of creating new technical means, improving the efficiency and quality of work of automation and communication devices, introducing advanced information technologies, advanced operating methods that ensure an increase in the level of train traffic safety. Particular attention is paid to line workers, practitioners. Readers get acquainted with interest with the materials of the headings «Exchange of experience», «Offer innovators», «Information» and others. The editorial team strives to expand these sections.

Readers' attention is paid to the heading «In labor collectives». In it, distance workers and brigades talk about the affairs of their teams, about veterans and young specialists, about achievements and problems.

Today a new generation of authors collaborates with the magazine. A good tradition is alive: scientists, designers, constructors, builders, operators, managers of services and distances are presenting their articles. Line workers share their practical experience.